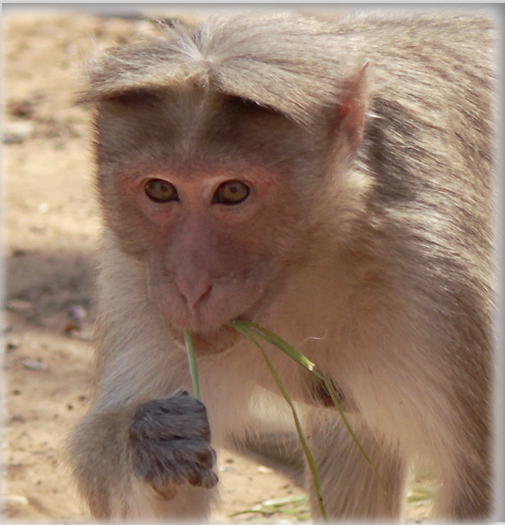 Mig is a young female bonnet macaque who arrived with her mother and father at the sanctuary in August 2006, as part of a group of bonnet macaques retired from a research laboratory. All the bonnets were born in captivity and had spent their entire lives under laboratory conditions, having been used either for breeding or various behavioral research projects before being retired.

Arriving at our sanctuary meant that, for the first time in their lives, Mig and her family were experiencing natural sights, sounds, and smells.

They were initially cautious of their new surroundings and the new sensations—the warmth of the sun, the open sky, grass, and soil.

It was more than a week before the group gradually started to venture down onto the ground and walk apprehensively across the grass.

As their confidence grew, they became bolder, and after a period of acclimation they began to actively explore and enjoy their new environment.

Mig has become inseparable from another young female, Ecki. They were both only one year old when they arrived at our sanctuary and have grown up together in their new surroundings.

The two spend their days playing with and chasing each other as well as the other young bonnets. They love to climb and swing from branches and platforms. They also enjoy foraging in the vegetation and soil, eating grass and other foliage.

They still have a lot to learn but, thankfully, can look forward to a meaningful life at the Born Free USA Primate Sanctuary.

Born Free USA is a national animal advocacy nonprofit 501(c)(3) organization, contributions to which are tax-deductible. Our mission is to end the suffering of wild animals in captivity, rescue individual animals in need, protect wildlife — including highly endangered species — in their natural habitats, and encourage compassionate conservation globally. Every year, millions of animals suffer in fur farms and circus cages. In our campaigns against such cruelties, we use powerful tools including legislation, public education, litigation, and grassroots networking. We also work actively with media to spread the word about challenges facing animals. Our primary campaign areas currently include animals used in entertainment, captive exotic animals, trapping & fur, and the international wildlife trade. The Born Free USA Primate Sanctuary, located in Dilley, Texas, offers more than 600 primates, many of whom were rescued from abusive situations in laboratories, roadside zoos, and private possession, life in as natural an environment as possible. In order to allow the primates privacy in their sanctuary home, and to avoid putting them on display, the sanctuary is not open to the public.