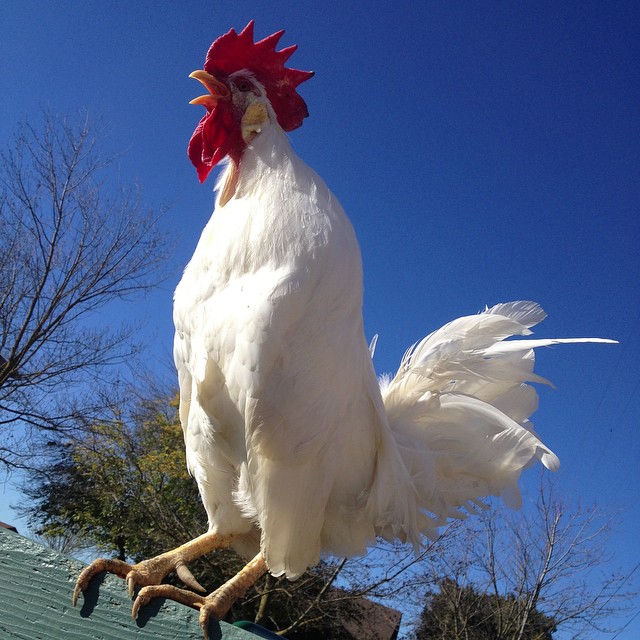 Patton the Rooster defied death twice before finding sanctuary with us.

He is a "battery" rooster who survived being shredded to death as a male chick at a commercial hatchery and thereafter lived at a battery cage facility with his egg-laying "sisters" for almost two years.

As common as roosters are, Patton's story is quite unique. Each year, approximately 250 million male chicks in the United States are killed simply because they have no use to commercial egg producers. Male chicks are treated and discarded like trash in the egg industry.

Patton's body is much smaller than other Leghorn roosters. We believe Patton's stunted growth is the result of being unable to stand up straight in a battery cage and grow normally.

Patton is a feisty fellow. We completely understand his inner rage. He was confined in a tiny wire cage for the first two years of his life.

Today, he enjoys life at the sanctuary. But, he isn't fond of the human race. We would love to restore Patton's faith in humans one hug at a time though. Several times a week, we cradle and hug this handsome guy. In time, we hope to win over Patton's affection.

This is Patton, a survivor of the egg industry.

Our mission is to provide life-long care for our rescued animals, and to educate the public about humane animal care and practices. We rehabilitate, both physically and psychologically, mistreated animals and, if possible, we will find appropriate homes for them. In an effort to prevent further cruelty to these animals, we educate the public on caring for companion animals as well as on issues concerning farmed animals. Harvest Home is an official sanctuary for House Rabbit Society, based in Richmond, CA. Nestled in fertile farmland in California’s San Joaquin Valley, our two-acre rescue and rehabilitation sanctuary is home to 11 unique animal species. Our life-saving animal protection efforts are focused primarily on rabbits and birds.