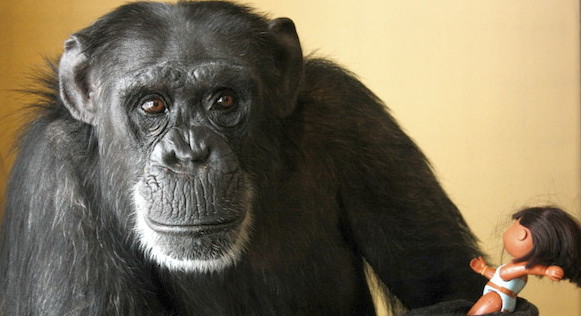 Foxie is very curious and watchful, and is careful and deliberate in her movements.

She can take a little while to warm up to new people, but is quite playful once she has decided to trust a person.

Of her chimpanzee family, she spends the most time with Burrito and Jody. She and Burrito can often be found quietly grooming each other.

Prior to her sanctuary life, Foxie was used in hepatitis vaccine research and as a breeder for the biomedical research industry.

Foxie had four babies during her years in biomedical research, including a set of twins. All of her children were taken away from her when they were very young - sometimes just days old.

Foxie adopted a doll to care for at the sanctuary within a month of her arrival - a Troll doll with bright pink hair.

Foxie now has hundreds of dolls thanks to her supporters!