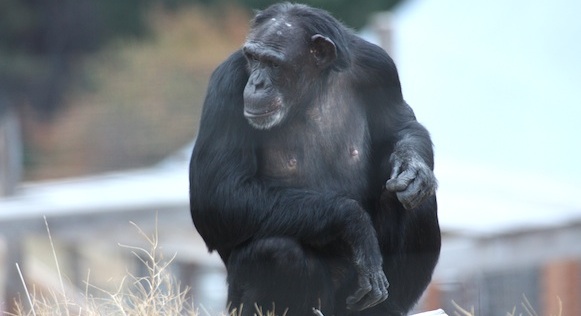 She stays busy by using the toys and other objects that are provided at the sanctuary. She has a deep love of cowboy boots and likes for her human caregivers to wear her current favorite pair as they walk on the outside of the chimpanzees' outdoor habitat called Young's Hill while she walks alongside on the inside of the fencing, patroling the perimeter of the habitat.

She is very interested in what the humans are doing and monitors the window to the kitchen as meals are being prepared for the chimpanzees.

Jamie can be a challenge to keep mentally occupied, but it's a challenge we gladly take on.

It is difficult to imagine how she survived the years of boredom and fear in biomedical research.

When she's not trying to outwit her caregivers or creating projects for herself, she plays games of keep-away with Foxie's troll dolls. These games can get rambunctious and usually result in wrestling and lots of laughter between the two.