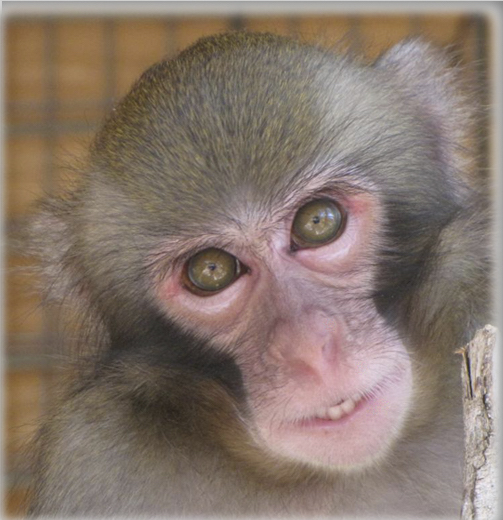 Khy is a rambunctious male snow monkey who arrived at the sanctuary in August 2009.

Sold as a "pet" when he was a baby, he quickly demonstrated his desire for independence.

Then, when he reached the age of two, Khy began to display unpredictable behaviors—typical of the abnormal emotional development of a monkey kept in captivity—and his caretaker needed to find a new home for him.

When Khy first came to us, he was quite a handful. But, his high energy, exuberance, and low tolerance for anything resembling constraint quickly endeared him to us.

However, we had a dilemma receiving Khy this early in his development. Given his behavior, we were confident that he could eventually be integrated into one of the large troops of snow monkeys living naturally in one of the multi-acre enclosures—but he needed a safe home to gain experience with the big monkeys until he could get a bit bigger.

We modified a good-sized cage and set little Khy up with his own heated sleeping quarters, where he would be protected from the elements yet remain outside to observe normal monkey behavior and interact with some of the residents.

Now, years later, after observing more mature neighbors and learning how to act and communicate with others, Khy shares his enclosure with another former "pet." They continue to grow and learn together.

Born Free USA is a national animal advocacy nonprofit 501(c)(3) organization, contributions to which are tax-deductible. Our mission is to end the suffering of wild animals in captivity, rescue individual animals in need, protect wildlife — including highly endangered species — in their natural habitats, and encourage compassionate conservation globally. Every year, millions of animals suffer in fur farms and circus cages. In our campaigns against such cruelties, we use powerful tools including legislation, public education, litigation, and grassroots networking. We also work actively with media to spread the word about challenges facing animals. Our primary campaign areas currently include animals used in entertainment, captive exotic animals, trapping & fur, and the international wildlife trade. The Born Free USA Primate Sanctuary, located in Dilley, Texas, offers more than 600 primates, many of whom were rescued from abusive situations in laboratories, roadside zoos, and private possession, life in as natural an environment as possible. In order to allow the primates privacy in their sanctuary home, and to avoid putting them on display, the sanctuary is not open to the public.